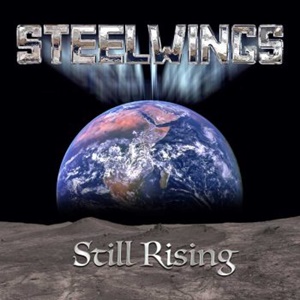 Part of the first wave of Swedish heavy metal during the early 80’s, Steelwings released four demos and a single before arriving at their self-titled debut album in 1989. Then a prolonged hiatus ensued, performing again for a 700 year city anniversary in 2007, releasing more singles, and finally a second album Back in 2019. Featuring three founding members in this current quintet incarnation, Still Rising is the latest record, another ten-track outing that continues a blues-based heavy metal sound, keeping those early influences at heart in all aspects of tones, energy, feel, and atmosphere.

The main components present for Steelwings consist of straightforward, blues-based metal of a NWOBHM/early hard rock base, meaning basic, four to the floor tempos, easy on the ear melodies with the requisite harmony chorus support, plus guitar licks/riffs that cement themselves quickly into your brain. Judas Priest, AC/DC, and The Scorpions are three prominent influences between the driving guitar parts of Michael Lindman and Gert-Inge Gustafsson and engaging, personable mid-range to high vocal inflections courtesy of Tommy Söderström. NASA sound effects open “Rocket”, an explosive effort midway through that exudes a higher energy tempo from Marcus Fritiofsson as well as uplifting musical hooks and a simplified chorus ready for shouting audiences to participate in unison with the band. Often the rhythm section passages reside in a slower, comfortable groove platform to allow the guitar/vocal combinations better penetration to shine, making “Easy to Go” plus the early Accept-like “Break of Day” standout tracks. The record ends on a majestic, left-field note for “Heat of the Night” – the ballad strains subsiding as the verses kick in, the ‘woah’-oriented background vocals over a prolonged solo break ideal to keep toes tapping and hands clapping.

Steelwings isn’t going to be the type of band to revolutionize the metal community. They know their strengths, stick to them, and as such have a stock old school appeal for Still Rising that is cult-like at best. But we know plenty who still dig that 1978-1983 sound of early hard rock/metal, and if so this one’s for you.