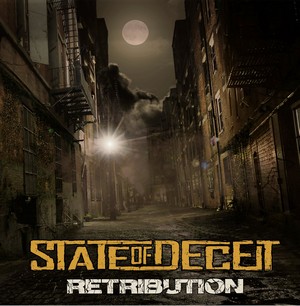 The first release out of the gate for State of Deceit, Retribution attempts to shoehorn a number of more modern and classic influences into something that the band can call their own. Considering the act only came together in late 2018, there are some considerable strong points to their arsenal, but also a few they might want to consider revising/dropping.

A merger of thrash, metalcore, and just a little bit of death metal, State of Deceit is falling on the more modern edge of things with their sound. At their heaviest, they are a force to be reckoned with. Blistering thrash influences rear their head as high-energy riffs and snarling vocals retrain just enough melody and groove to get the listener involved with the whole process. Notable solos also pop up, engaging a more melodic current in a way that is flashy without being too over-the-top, and “Vengeance,” “When Words Fail,” and “Vipers” all show some great promise for those who like that more brutal side of the New Wave of American Heavy Metal. It’s urgent and effective. The catch? The other three tracks in which the band attempts to showcase some lighter and softer elements. Switching further into the clean/harsh vocal trap, the clean vocal segments all but suck all of the energy from the tracks at hand. “The Black” has some absolutely cringe-y sections of clean vocals that all but make the listener scratch their head at the implementation, and the other tracks don’t fare much better. Given that this is the first attempt, the band would be wise to either jettison them completely, or make sure that they fit better with the music (admittedly, this scribe leans on the first option).

One of those cases where one element is solely keeping a band back from something greater, Retribution is all but crippled by ill-fitting clean vocals. A real bummer as the rest of the material absolutely shines for the genre at hand, so it’ll be a ‘wait and see’ in order to determine where they move forward from here.