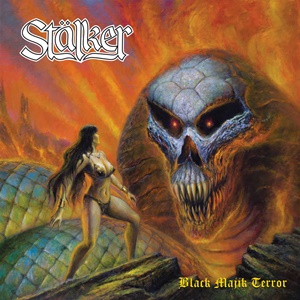 Often regarded in it’s own sub-genre, speed metal contains a distinct energy and precision that feels like the songs at any second could go off the rails – only to be railed in by a catchy scream or surprising hook from the musical front. New Zealand trio Stälker have been quickly making a name for themselves in the scene since their debut demo Satanic Panic from 2016 – signing with Napalm Records who released their full-length Shadow of the Sword the following year. Hoping that lightning can strike again, Black Majik Terror emphasizes a mix of blitzkrieg riffs and high-octane power along with the occasional throwback traditional nuances that keep people headbanging and shouting along to the tracks.

The piercing scream of bassist Daif starts opener “Of Steel and Fire” on proper footing, the relentless riff and pounding tempo engaging those elements that push hair up at attention, delivering chills and thrills in much the same way early Metallica, Venom, and Exciter could during the early 1980’s – along with lyrics of rage, vengeance, and storming attacks that match the musical template. Evil church organ strains and bells set the tone of the menacing title track, the guitar play of Chris C. a combination of frantic chord progressions, divebomb leads with occasional melodic spots for sophistication that you won’t soon forget. And so it goes from beginning to end – you would think that most would grow weary of the intense ferocity present, but the group know when to occasionally put in those ‘breather’/catchy moments in specific ways to make the next bulldozer salvo even more convincing than the last. “Holocene’s End” as the longest cut for 6:11 contains some longer instrumental spiderweb twists that throw a bit of “Phantom of the Opera” feel to the arrangement, while the NWOBHM movement sprouts up from time to time in specific runs for “Demolition”. Daif’s main vocals have a gritty/gruff mid-range nature beyond his Halford-esque meets John Cyriis (Agent Steel) helium-high battle cry screams, surprisingly distinct and discernable given how much word power he spits forth in a short time during the verses/choruses.

Delivering nine songs at a perfect under forty minute vinyl length format, Black Majik Terror even contains Sabbath-like doom strains during “The Cross” where Daif, Chris, and drummer Nick join as one to pay homage to the godfathers of heavy metal for a couple of minutes before tearing limbs and smashing skulls at their comfortable speed zone habitat. Stälker much like America’s Seax and Belgian band Evil Invaders keep the speed metal scene alive and kicking through solid studio work, awesome songwriting mechanics, and pushing the pedal to the floor.