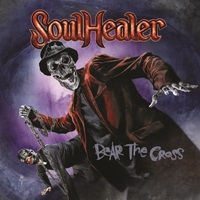 Mascots and cover art in heavy metal can go hand in hand, especially in the melodic metal/traditional metal realm. Yes, Iron Maiden’s Eddie probably started things eons ago, but through the years everything from pumpkins to eagles, dragons and swords often symbolize what fans can expect in a certain band. For instance, when looking at the discography of Finnish act SoulHealer, their three albums portray a consistent top hat skull character in illustrative poses. Bear the Cross is the third album from the quintet, ironically giving off a similar possession/puppeteer vibe as The Number of the Beast – but in the long run, do they have the musical back up to forge their own way in an overcrowded marketplace?

The foundation of SoulHealer’s style is firmly Euro-Metal to the tee: the riffing resolute, the melodies beckon for audience participation, and the tempos classic heavy/power offerings. Readers who have long historical context in the genre, as well as large record collections, will probably be able to pick out reference points on the first listen. “Unleash the Beast” has a lot of early Hammerfall spirit, the title cut runs in Somewhere in Time Maiden-pastures (the lead break action between guitarists Sami Mikkonen and Teemu Kuosmanen exciting in a Priest way), while “The Viper’s Kiss” has a lot of that Running Wild power charge that made them a long standing favorite.

Which is all well and good if the singing can match the metal muscle SoulHealer’s musicians deliver. In the case of Jori Kärki, this can be hit and miss depending on the song. When asked to hit those ear bleeding Kiske/Dickinson highs of their legacy, the results are painful and sometimes laughable for “Fall from Grace” or closer “Settle the Score”. His wheelhouse is middle of the road semi-melodic note runs, fusing together Rolf Kasparek and Graham Bonnet to be served best on anthems like “Dead Man Walking” or the charging, Metal Church-ish “Revealed”. A slightly modern production on this record compared to last year’s Chasing the Dream gives the guitars and drums more punch, which could help gain more than the ‘old school’ following.

Those who seek out the twin guitar lines that make you want to bust out your own guitar moves wrapped around a solid melodic heavy metal style will find Bear the Cross quite delightful. 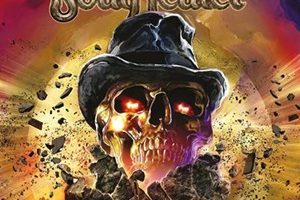 SoulHealer – Up from the Ashes (Rockshots Records)