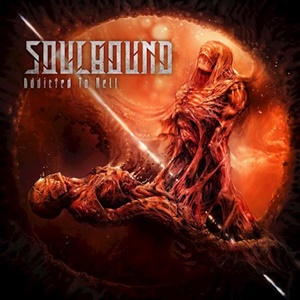 Starting from an alternative metal platform and morphing into gothic and industrial lines, German act Soulbound have an alluring sound for their Addicted to Hell album. The paradox between mechanized anger and darker, atmospheric material assures the listener that they will probably not be apt to hit the next button frequently between these thirteen tracks. Exploring the human psyche abyss in terms of the lyrics, the music often matches the penetrating and personal themes we all tend to wrestle with: aggression, confusion, depression, disappointment among them.

Expect a vocal presence that is mid-range, commanding, and a mixture of gothic strains against a more forceful metal veneer – making the soft to harsher tones for “Toxic” and slightly uplifting “Alive” two standouts in that regard, as if James Hetfield were colliding into a montage of Rammstein and Rob Zombie. The industrial side comes out in the simplified drum beats, while the gothic elements reign during the guitar tone and wide array of keyboard segments that float in and out – when the band choose to display a slower ballad like “Undone”, they don’t sacrifice the despair or darkness especially in the explosive chorus compared to the calmer restraint delivered in the verses. Stunted vocals and a jumpy keyboard/drum syncopation should give “Devil” a lot of appeal to the younger segment, while “Fire It Up” provides a late album energy boost, the repetitive chorus and staccato-like guitar sequels reverberating that ideal alternative sequence to keep heads riveted and bodies bouncing. At 50 minutes, Addicted to Hell contains plenty of musical information to consume – but possibly could have been a pinch stronger at cutting back a couple of songs.

As a newcomer, Soulbound could make some inroads in numerous live situations, especially if their energy and presentation on stage can match up to the dynamic bombast and diversity present on record. If you enjoy a bit of the commercial side of gothic/industrial metal, this record would slot nicely into your growing collection.