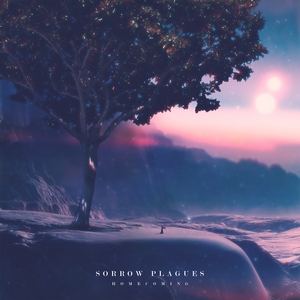 A one-man atmospheric black metal band might have some shrugging their shoulders given the upsurge in recent years, but don’t be so quick judge based on one quick description alone. Despite the number of hipsters wanting to be the next Deafheaven (or the whole Cascadian craze), the genre has some real essence and emotion behind it when done properly. The second full-length album from Sorrow Plagues, Homecoming, is most definitely striking evidence of that.

The work of David Lovejoy, Homecoming has familiar elements if you have been checking out this type of music over the past few years (or checked out the band’s debut). But what Lovejoy has done with the sound should be quite clear upon listening to opener, “Departure.” This is not ‘aggressive’ material, even when it wades into blastbeats and screaming, but focuses on downright beautiful melodies. They aren’t exactly catchy, but the morose and sorrow-filled (no pun intended) type that stick with you because of their emotional depth. And they are rightly at the center of each song (with seemingly minimal vocals to distract you from them). There isn’t a track that isn’t just soaked with gorgeous melodies that grab you and put you under a spell until the song in completed. If there’s one song that is catchy, it’s that of “Isolated,” with an upbeat, driving melody that you’ll be hard-pressed to remove from your brain once it gets going. It’s a glorious riff that you’ll wish returned before the end of the song. As one can imagine, the songs here are lengthy, but the melodies fill the time well. The atmosphere and vibe of the album is one that you can listen intently and be satisfied, or just focus on the mood and retain a sense of engagement.

Intoxicating melodies make Homecoming an album worth diving into. The whole point of atmospheric black metal is to leave an emotional impact, and Sorrow Plagues has a firm grasp on how to do this in every single track. Goose-bump inducing stuff!