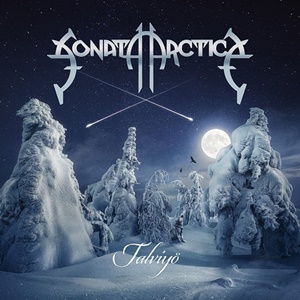 Sonata Arctica symbolizes a veteran band who establish a dedicated following in one musical direction – and through personnel changes and personal desires, steer their ship into a new arena midway through. Even though vocalist/keyboardist Tony Kakko leads the songwriting charge, ever since the loss of guitarist Jani Liimatainen in 2007 following the polarizing Unia effort, it’s apparent that the band prefer to explore progressive or mid-tempo/ballad prisms, laying off the speedy, power anthems that established them as relevant headliners on their first four albums. Talviyö as the group’s tenth studio record, a Finnish word roughly translated as winter’s night, continues the band’s exploratory nature of diversity in atmosphere and vision, opening melodic and groove horizons – incorporating everything from folk and classical measures to obvious hints of Queen and even 90’s alternative rock leanings.

Children choir strains and a clean guitar open “Message from the Sun” – the steady double bass and occasional rising upper melody during the chorus from Tony giving hints that this may be a nod to the past, while Henrik Klingenberg delivers a flashy keyboard break. The momentum of the record quickly goes downhill, possibly reaching lukewarm levels at song three with “Cold” – the main guitar hook and somber mid-range melodies lackluster and something one would expect maybe from Bush, not these gentlemen (‘dancing with my back against the wall’ a cringeworthy line). The bass play of Pasi Kauppinen stands out throughout, as he’s not content to blast out root notes but gives progressive life and charm to certain songs like “Who Failed the Most” and “A Little Less Understanding”. And for the first time in quite a while, there’s an instrumental song with “Ismo’s Got Good Reactors”, a spacey effort that features an exotic electric melody foundation that builds and swirls – allowing for some killer interplay between all the musicians.

Overall the record just doesn’t have enough captivating/elevating moments, even when the band chooses to be more reflective or cinematic/theatrical with their tones, melodies, and hooks. “The Raven Still Flies With You” is the longest track at 7:39 but just meanders in protracted verses and simplified parts that don’t really take the listener anywhere, the instrumental break at 1:58-2:22 the clearest example of a momentum killer, versus the more adventurous surprise a minute later. Sonata Arctica at this point are content to lead from their own creative vision and path – so if you’ve dug the post-Jani years of the band, Talviyö may find favor with you – but for most ardent fans, they’ll discard this or ignore it altogether.