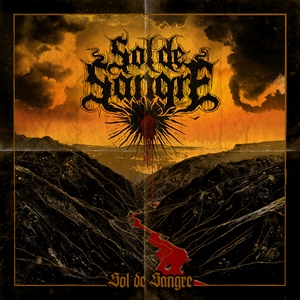 If nothing else, Sol de Sangre did a great job at subverting expectations upon hitting play for the first time. One doesn’t look to a ‘death metal release’ to open with a beautiful Spanish guitar melody (“Los Andes”) and it does catch one off-guard in the best way possible, as does the classical ending it contains with “Llanos del Infierno.” While the intense music between may feel more familiar, it’s still not without its surprises.

Sol de Sangre have a sound that feels akin to old school Swedish death metal being played through an early Sepultura filter. It’s nothing if not intense, as “Perros con Sarna” quickly introduces with a barrage of mammoth riffing and pounding drums. The vocals lean more on the Sepultura side of things, with a shouted bark that’s quite effective in getting them out of the way of more traditional old school death metal. The band’s fury is their main draw as the album moves along, with the strongest tracks embracing a blastbeat-friendly layer of chaos (“La Feria Del Chivo”) with usually unloads an equally frantic and impressive solo and just enough melody to keep it from feeling like a variation on the previous track. But they can pull off some more lumbering and heavy moments, with the title track slowing down the works into something more melodic yet still menacing. It’s a much needed rest (along with the song’s intro, “Purgatorio”), and keeps the listener from too much fatigue from the extreme tempos.

An energetic and enticing romp into death metal territory, Sol de Sangre deserve some applause for not simply following the path laid before them. The European and South American influences are noteworthy and produce something more interesting than taking either on its own. Sol de Sangre is indeed blistering material, but it’s also fun and going to leave you with a grin on your face when it ends.