So This is Suffering – Palace of the Pessimist (Unique Leader) 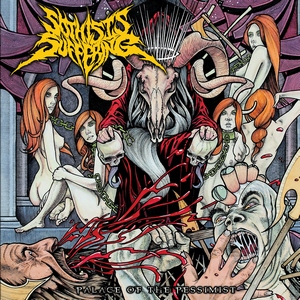 As the resident staffer when it comes to tech death – any new release from Unique Leader gets viewed with some anticipation. Even when, in this case, when it was clear that So This is Suffering was going to be more of a deathcore contender. On a label more known for tech-infested waters, there had to be some reason they were drawn to the label right?

Unfortunately the answer to that question is a solid no. Palace of the Pessimist does little to stand apart from the clichéd masses within the deathcore realms. Arguably, there are some more technically impressive riffs within the band’s speed runs (between breakdowns of course), but technicality by its own never really amounts to much, which is where riffs happen to fall when simply interspersed between the aforementioned breakdowns. These sections (see “Portraits of Fixation”) don’t stick around long enough to leave a lasting impact – most of that work is left to the chugging. As often stated, breakdowns can work and provide a fierce narrative, but there has to be build-up. Much of Palace involves spacing things out minimally between these slowdowns, simply causing the band to lose momentum instead of increasing it with each engagement. When most of each track feels like a breakdown (thankfully there’s no breakdowns within breakdowns here), it starts to turn into one endless loop.

There’s little So This is Suffering does that hasn’t been done by countless others within the genre – the ‘hear them coming a mile away’ breakdowns, standard growl/rasp combos, and speed runs all come into play here. Attempts at more technical or melodic moments leave a feeling of too little too late as the breakdown mechanisms kick into high gear. It’s done no worse than the rest of the acts out there, but there’s nothing to make it rise above the rest either. Unless your favorite thing to remark about an album is, “That shit was so heavy bro,” it’s safe to assume you can avoid this one.