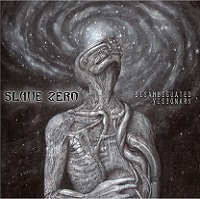 Long-standing Irish laddies Slave Zero have been around the scene since 2000, though they are hardly a metal household name. It’s been four years since their last output, and this 5-song EP serves as their next evolution in sound.

Given the artwork and lengthy song-titles, Disambiguated Visionary more than dabbles in the increasingly less fertile metal landscape we lovingly refer to as outer space.  “Embroidered Strategy of Calculated Misrepresentation” (say that five times fast) even has a slightly eerie/cheesy ‘80s inspired riff that nicely lends itself to the sci-fi genre. For a more deathgrind-oriented band, the riffs are surprisingly interesting (as just mentioned), and keep the band afloat between the slamming death metal sections.

While they have some strong instrumentation, their hardcore infused approach to deathgrind is dampened by the vocals.  The “tough guy straining on the throne” variety feel almost out of place but at least they provide some power, unlike the higher, A.C. inspired grind shrieks that outwear their welcome before the end of the first track.  Some less abrasive vocals would do wonders for their sound.

Though I could do without the vocals and the exhaustingly long song titles, the music behind Slave Zero is more interesting than what other bands of their ilk are producing.  Some of the riffs are uniquely sci-fi in nature and add a flavor usually missing/misused from a source that is starting to wear thin topically.  Perhaps an instrumental release of Disambiguated Visionary is in order?