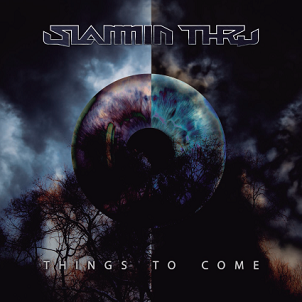 A pardon to the name, obviously. Slammin’ Thru hail from Spain, so we’ll take into account the good ‘ole language barrier. And yeah, at first glance, the band’s name gives off the appearance they are a hardcore troupe, which couldn’t be any further from the truth. Rather, they are a classic progressive/power outfit, strongly resembling Arch-era Fates Warning. Now, they don’t even nip at the heels of them, but Slammin’ Thru states their case on the seven-song Things to Come, which is their first proper album in a career that dates back to 2002.

As you would expect, the front and center focus is on vocalist David. Singers of European or even Spanish descent often have their issues with enunciation and clarity, but we’ll give the man this: he’s a pretty comfortable sounding vocalist, as in, he’s not dominant or offensive. His chorus choices serve opener “Metallic Leaves” well, honing in on the above-mentioned John Arch reference. David’s best moment comes on “Pariah,” where he’s backed rather ably to be a run of lunging melodies and sub-thrash riffing. And frankly, if we’re looking to really go out on a limb, Slammin’ Thru bear some resemblance to Hollow, a late ‘90s band subsequently buried on Nuclear Blast’s roster.

At any rate, Things to Come displays neither the immaturity and obvious hand-wringing that often befalls Spanish power/progressive bands. And more important, Things to Come (and Slammin’ Thru) are simply an honest, dutiful band who will probably never make a global impact, but could reign supreme in their homeland or neighboring territories.