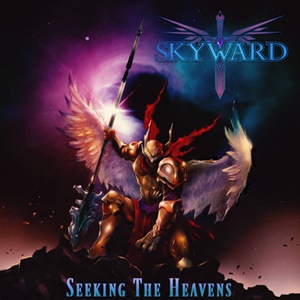 Certain signs point to obvious categories in the metal realm. Take the winged warrior adorning the cover of Skyward on this four-song EP Seeking the Heavens – if you add in the sword cutting through the moniker, it doesn’t take much brain matter to figure out we are dealing with power metal here. Hailing from the UK, there are pluses and minuses to their approach – a clear case of understanding the basic elements that power metal fans expect, but still going through those growing pains necessary to shed their influence skin and become an entity unto themselves.

Keyboardist Fabio Garau and guitarist Ben Skingley command the lion’s share of musical attention, throwing a mixture of solid rhythms and fleet of finger breaks that European power metal has been well-known for since the 1990’s. The rejoiceful, triumphant hooks pop in at all the right times, making “Alive” and the title cut two arrangements that will probably find favor with most. Hector Clark aims high with his delivery, living for that falsetto arena a la Michael Kiske and Timo Kotipelto – although there are spots where he maybe bites off a little more than he can sustain and becomes pitchy during the tranquil opening verse for closer “The New Kingdom”. Three clear influences when it comes to the speed, harmonization, and uplifting chord progressions would be Stratovarius, Blind Guardian, and Dragonforce – but they haven’t quite mastered the art of distinctive songwriting compared to their mentors.

The drum machine and production values bring the quality down a couple of notches – as if the band delivered this material on a bare bones budget. And when you try to make a solid first impression given the plethora of choices globally from self-released bands beyond label product, Skyward is going to have to step things up several levels if they want to achieve more than a cursory glance locally. At this point, Seeking the Heavens feels like a young track star struggling to get a solid jump on the veterans, who can lap the field due to their proven songwriting and sales pedigree.