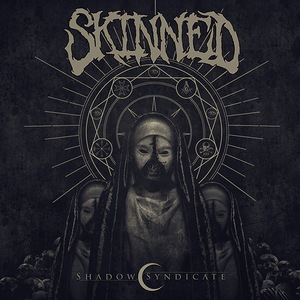 It’s not often that one heavily steeped in the death metal realm can stumble across an act within the genre that has been relatively unknown to them with such an impeccable vibe. But then again, Colorado-based Skinned has been doing this for over two decades, with Shadow Syndicate being the band’s fifth release to date. There’s a clear vision here that only veteran status can provide.

As the band formed in the 1990s, there’s still a piece of the band that hasn’t moved past that point. It’s not a bad thing mind you, as their approach to brutality and energetic carnage has that lasting appeal that bands of this nature strive for. It contains all of the major components that one hopes for in the genre as well – heaviness above all, but with enough technicality to keep you intrigued (solid, but nothing too over-the-top here), and some sneaky melodies that also catch your ear but still work in the realm of the visceral nature of the music. There’s something almost Scandinavian about some of the melodic moments (see “As Their Bodies Fall”) but think more along the lines of Hypocrisy than In Flames. Enjoyable leadwork, punishing riffs, and inhuman vocals also play their part in the whole thing, along with a production that also benefits the band in terms of balancing grittiness with clarity.

It almost goes without say that Skinned aren’t bringing much new to the table here, but they sure do have a very clear idea for how all of the death metal parts and pieces go together. Shadow Syndicate has them all in working order and in top shape, which should be enough to make Skinned a more recognizable force. Solid and easy-to-enjoy death metal.