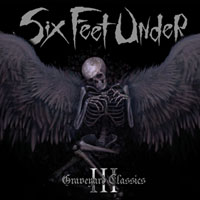 Boy, the gap between Cannibal Corpse and Six Feet Under keeps on getting wider, doesn’t it? Surely no one would fathom CC ever doing something like this, even if they were following up a surprisingly sturdy album like SFU is doing after 2008’s Death Rituals. Yet here comes Barnes and co. with Graveyard Classics 3, an album that is going to get hammered in the press just like the first two installments and for good reason – this is death metal karaoke of the not-funny variety.

Musically, the band is light-years ahead of its Allen West days (1995 – 1998) and a lot of the credit goes to underrated guitarist Steve Swanson, who regularly has to make chicken salad out of chicken shit. Just a cursory run through of some of the cuts on Graveyard Classics 3 like Mercyful Fate’s sacred “Dangerous Meeting” or Van Halen’s “On Fire” proves Swanson to be a resourceful player. Given SFU’s longstanding death metal-for-dummies modus operandi, it’s no small miracle that this is easily the most appealing aspect of the band.

Vocalist Chris Barnes continues to be the band’s sore spot, as his indecipherable gurgles have reached near-unlistenable proportions. There’s not even any infliction or enthusiasm behind his voice these days – he just acts like he’s spitting up broken glass (of the force-fed variety) and sullies otherwise excellent renditions of Metallica’s unheralded “Frayed Ends of Sanity,” Exciter’s “Pounding Metal” and Prong’s classic “Snap Your Fingers, Snap Your Neck,” which is probably the best rendition here. There’s not a shred of appeal behind Barnes’ vocals anymore, which explains why CC is better off with Corpsegrinder.

For a band that needs to do just anything to keep its audience interested,Graveyard Classics 3 is very ill-timed. Think about it: you just made your first half-decent album in a decade with Death Rituals, people are starting to come back, but scare ‘em all away with this. At least they didn’t opt to cover a full album again…their homage to Back In Black was atrocious