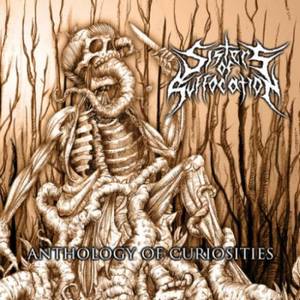 After catching some buzz for their 2016 EP, Brutal Queen, it was time for Sisters of Suffocation to show the world if they could maintain the same high quality death metal over the course of a full-length effort. With a light being cast in their direction due to the fact that this is an all-female death metal act, we’ll get that point out of the way, so that we can focus on what’s really important…the music itself.

Anthology of Curiosities is brutal. No doubt or question about it. Each one of the tracks therein has a pedigree of brutal death metal to it, even if it is occasionally spiced up by some melodic currents or a few isolated sections of spoken word vocals (which are quite effective). The aggressive riffing is such that fans of acts like Cannibal Corpse and Suffocation could easily dig into it on the first listen, yet some of the slightly melodic turns make it so that it’s never a blur. Dark atmospheres and acoustic guitars roll out in “This is Not My Home”/”I Swear,” chunky riffs give “Psychosurgery” more substance, and excellent leadwork (“The Hunger”) all play their part in this, but the visceral moments also have an underlying coat of melody that you can pick apart with subsequent listens. There’s a catchiness beneath some driving riffs like those in “Our Bodies Will Rot” that will capture your interest and help bring you back to the album once it’s finished. Vocalist Els Prins has some guttural mastery, but also switches it up with some screams (along with the spoken word) to give her a more well-rounded arsenal than you might expect to find.

Sisters of Suffocation deliver a full-length on par with their previous material in Anthology of Curiosities. Those who are looking for something that’s entirely brutal, but not mindless in its bludgeoning are going to find some thrills here. 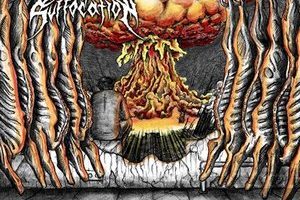