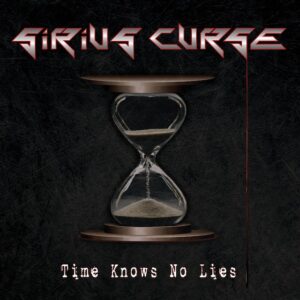 Containing members that had previous experience together during the 80’s/90’s in the German band Exterior, Sirius Curse from southern Germany began in 2014 and took their time due to established careers/families before releasing this full-length debut Time Knows No Lies. Unlike most groups intent on getting product on the scene immediately, the two and a half years from plan to competition proves to be a wise move, especially for those who love good old fashioned, back to basics heavy metal.

After initial spins it is evident this quintet possesses a great mix of influences from the 70’s and 80’s – using traditional/classic heavy metal as a foundation, building specific elements out in terms of guitar mechanics and rhythm section enhancement with some progressive and bluesy flair. The natural tones for drums, bass, and guitars give the production and overall sonic output a natural warmth and penetrating punch that sounds more in your face, refreshing in an era where digital workstations often take away the human element from this music. The NWOBHM plays a key role in Sirius Curse’s outlook – check out the slower, doomy strains against vocalist Peter Hirsch’s gritty melodies during “No Tomorrow” that easily recalls Angel Witch while a cultural marching follow-up “Crucified” has a bit of that Queensrÿche meets early AOR feel, the calmer instrumental sequence a bit of a groove meets progressive showcase for bassist Dominikus Sautermeister and drummer Simon Wilde. “Bondage” as the closer is the longest track at 6:03, containing an interesting mix of groovier riffs and twin axe interplay moments, another stellar effort for Peter to weave a mix of solid epic melodies as well as personal darker inflections. Always keeping the eyes on strong musical/vocal components that match up seamlessly to the tempo and arrangement on hand, Sirius Curse aren’t really reinventing the wheel as far as a style – merely playing to their strengths, adding progressive and bluesy components to add dynamic nuances to the proceedings.