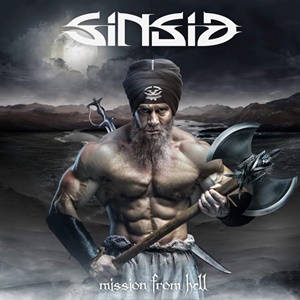 There are many correlations between wrestling and heavy metal through the years – theme entrances done by acts like Stuck Mojo and Motörhead, or wrestlers venturing into metal bands like Chris Jericho for Fozzy. Sinsid is a Norwegian band with a former wrestler now as a vocalist in Terje S. Sidhu, feeling the need to channel his energy into a full metal outfit. Mission from Hell as the band’s debut album delivers ten tracks mostly in the traditional metal style, although influences from the blues and rock to even thrash filter in from time to time.

The vintage sound and presentation throughout gives the material throwback 80’s appeal – straightforward power chords, bluesy lead breaks, and tempos that are pretty steady in that four on the floor format allow the vocals to have more of that Dee Snider meets Teutonic metal delivery. Straddling an act like W.A.S.P. with Grave Digger as far as guitar hooks and chorus action during “Hellhammer”, you also get more of a lurking, doom build up for “Infernal Pit” that channels Iommi-style clean/electric strumming against an epic cavalcade of passages that moves into Amon Amarth/Manowar motives over the course of it’s 7:16 time frame. Admirable, tasteful play from lead guitarist Sten Roger Knusen and bassist Grzgorz Urbanski engages the most interest as the second half of the record rolls along, with the title cut containing some cultural, emotional strains to make this one of the album highlights.

Conversely, Sinsid suffer from a penchant to keep much of this material in a similar mid-tempo or slower/doom vein where the riffing, hooks, and melodies fall flat against who they aspire to become. The main blame lies at the feet of a lackluster, uninspired drum performance and Terje’s limited vocal range – it’s clear the man’s passionate about the genre, but the measured words within closer “Land of Doom” falter in comparison to a Blackie Lawless-like snarl on the more energetic “Union Sign”. Mission from Hell just needs a bit more creative elevation and critical ears to push Sinsid beyond the basic ideas into the next level of respect if they wish to gain any traction in today’s marketplace. 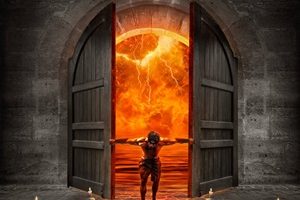