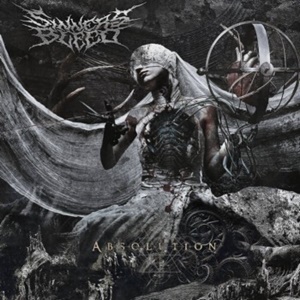 Many staff writers at Dead Rhetoric overlap in their metal tastes – especially when it comes to progressive nuances in specific sub-genres. Take technical death metal – the intricacies and mesmerizing heaviness as well as musicianship alone can be astounding, and if you couple it with versatility and the right hook/groove sequences, you could have a major, enduring appeaser on your hands. Case in point – German quintet Sinners Bleed, who released their debut album From Womb to Tomb in 2003 and have been away for 16 years between records, due to personal life circumstances and membership changes. It’s a testament to belief in the individuals and where they want to push musically and creatively – as Absolution contains ten tracks and just over 37 minutes of bone crushing, skull splitting death metal that also achieves that balance between ‘wow’ moments and parts designed for unison hair windmills.

The guitar team of Sebastian Ankert and Arne Maneke will gain the lion’s share of admiration – slicing and dicing, filling the landscape with titanic speed riffs and runs while knowing when to push the mid-tempo rhythm factor to set up the next spirited harmony twist or upper echelon picking maneuvers. Check out the thrash/death intensity for “Devoured Hatred” and Morbid Angel-ish “Obedience” for their twin axe masterfulness. Vocalist Jan Geidner provides that low growl intensity – militant yet discernible, almost mirroring acts like Grave or Napalm Death right out of the gate for “Age of the Crow” while matching the venomous speed sequences through his rapid roar on “Jesus’ Delusion Army”. Many times, bands in technical death/thrash rely too much on brutality and stay stuck in hyperactive gear. That’s not the case for Sinners Bleed, as they know when to temper things with a bit of old school, mid-tempo finesse a la Death, Slayer, or even Revocation during the neoclassical laden lead break action for “Gleaming Black” or the melodic mid-section of “Dawn of Infinity”.

Individual songs take center stage for Absolution – the material will not be a blur or an exercise in progressive exhaustion purely to impress the musician marketplace. Sinners Bleed place the emphasis on the right angles – hitting the technical death buttons while injecting the right thrash and mid-tempo reprieve passages necessary for ultimate brain recognition and retention. This could hit a great cross-section of death metal followers, old and new – and hopefully we won’t have to wait until the 2030’s for a third full-length.