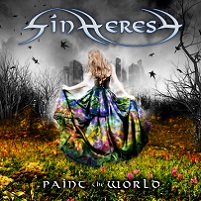 More beauty and the beast action, this time from a fledgling Italian act in the form of the goofily-named Sinheresy. Since the band’s 2009 inception, they’ve popped out an EP and a video for the song “Temptation Flame,” one that DR magically stumbled upon during our various internet travels. While the video is a tough go, their debut Paint the World benefits from the gloss of renowned producer/engineer Jens Broman (Symphony X, Amon Amarth, Kreator), giving the band a much-needed professional sound to go along with their competent symphonic metal approach.

As with any outfit playing this style, female singer Cecilia Petrini is the X-factor. In spite of her relatively modest vocal hues, she has her moments of worth, like the chorus vamping on “The Gambler” and “Lost in the Shadows.” She has to work with male vocalist Stefano Sain, who is cast in the Andrea Ferro (Lacuna Coil) role as harmonious grunter, looking to fill in the blanks, never quite given a full song to steal the spotlight. Nevertheless, the keyboard shades and power/progressive moves of “Last Fall” are manageable, while some duds in the lot come by way of the cheesy “Our Angel” and bland “Breakpoint.”

Originally formed as a Nightwish cover band, Sinheresy’s development into a reputable act shouldn’t be stunted by the average nature of Paint the World. Instead, they’ve got a few bugs to work out (i.e. Sain), but nothing worth fretting too much over. Sure beats playing covers of “Nemo” every night for peanuts, that’s for sure.