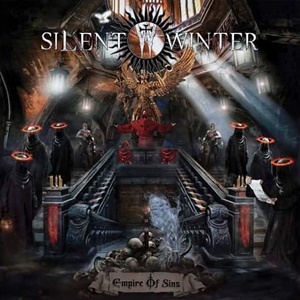 Certain predispositions exist when it comes to specific genres. For power metal, most ardent followers expect bombastic music chock full of uplifting riffs, speed, and choruses ready made for unison singing – plus lyrical content of a fantasy/mythology variety where battles are won, heroes unite and overcoming obstacles to maintain a personal or moral victory seem paramount. Greek act Silent Winter check off most of the requisite boxes right away from the first track “Gates of Fire” off their new album Empire of Sins – the second full-length from a quintet with a history that dates back to 1995, yet only recently gaining momentum since becoming an active entity again in 2018.

Only guitarist/keyboardist Kiriakos Balanos remains from those early days – but he surrounds himself with a capable and potent set of musicians for this rebirth. Immediately evident and up front are the potent pipes of vocalist Mike Livas – who has been in Helloween tribute bands and performed live with Timo Tolkki (ex-Stratovarius) against a host of other Greek power/progressive acts. He can hit those Tate/Kiske highs as well as belt out a Halford-like scream at a moment’s notice – check out his upper register comfort for “Shout” while the slower twin guitar melodies and lead break shred antics fill up the instrumental spots in ace heroic fashion. The triumphant keyboards signal the next Helloween/Freedom Call-oriented parade of guitars and double kick activities during “Mirror” – Mike again using multi-layered vocal harmonies during the chorus, while the crunchy guitars and sixteenth note-tempos obliterate your body, mind and soul along with the compensatory musical melody circulating during key instrumental sequences. The band mixes up the normal faster affairs with some mid-tempo efforts that showcase a bit more conventional heavy metal appeal – “Wings of Destiny” aligning well with echoes of Judas Priest/Primal Fear, while the almost eight-minute title cut contains a lot of those dramatic, epic notes of atmosphere and progression that will make many think of classic 80’s Iron Maiden. And for a change of pace, “Leave a Light On” – the 80’s pop hit for Belinda Carlisle, gets a full-on mid-tempo power treatment revision by the band, complete with soothing background vocals, and a boatload of galloping guitars and poignant hooks in all the right places.

Empire of Sins is an above average outing but isn’t exactly adding anything new to the power metal playbook with its obvious influences and standard execution. While awaiting the upcoming Helloween record release later in the year, Silent Winter could fill that longing for your power metal needs.