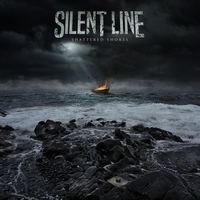 2015 continues to push out some strong melodic death metal at the tail-end of the year. This time, we have Canada’s Silent Line, who deliver their third independent offering (though admittedly the first this writer has been privy to). Shattered Shores is their first attempt at a concept album, with wraps around the idea of a mysterious island – told from the perspective of one person who is trying to figure out how they arrived there/how and if they can leave.

Intriguing concept in tow, the music needs to be compelling to sell the story, and it does with Shattered Shores. Not entirely sure why, but Clayman-era In Flames comes to mind first as one of the larger influences. There are some fantastic dual-guitar harmonies at play in a number of tracks (see “Erosion” for a real doozy). But there are also some more modern touches, as well as blast-friendly and aggressive side to the band. Ever being able to avoid being tossed into one corner, this aspect of the album keeps things fresh. One second you could hear a clean vocal chorus (with some minor modern trimmings), and the next moment you can be overwhelmed by blastbeats and vicious roars (see “Summersong). There’s even some gloomier aspects from time to time, giving some nods to bands like Insomnium or Omnium Gatherum (“Shattered Shore II”). But it’s done effectively, with some great transitions and songwriting to keep everything tied together.

Silent Line has all the melodic death metal mechanics down pat with Shattered Shores. But best of all, they keep things interesting and fresh; never taking the most predictable or easiest route. This is sure to get some attention thrown their way. Perhaps the third time really is the charm in this case.