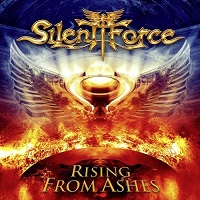 German guitarist Alex Beyrodt seems like a good guy, is a quality player, etc., etc., but between you, DR, and the fencepost…Silent Force should have remained inactive. Beyrodt (who also does time in Primal Fear and Voodoo Circle) has revamped the band’s lineup since they were last heard from in 2007, most notably parting ways with vocalist DC Cooper, who depending on who is queried, might have been the only good thing about Silent Force. In place of Cooper is Michael Borrman, who has effectively turned the band into something like the Richard Marx version of European melodic metal on Rising from the Ashes, the group’s sixth album.

Borrman has too much of an AOR voice to turn any of these songs around, so where the material is already watered-down (see: the Stratovarious rip-off “Circle of Trust” and silly “Turn Me Loose”), it becomes even more spent and cliché.  Really, a lot of these jams have the swivel and 80’s wiggle of a Maybelline-endorsed band, they’re just run through the European melodic metal filter, thus coming out with a nice sheen, but a load of nothingness. Like, where else would a song like “You Gotta Kick It” fly? Not in the States. How about “Born to Be a Fighter?” Same thing.

We’ve completely omitted the fact that Primal Fear bassist/primary songwriter Mats Sinner is also in the Silent Force ranks, but not even him could bail out these bottom-rung, and tired songs. Good thing Primal Fear is doing so well of late…Beyrodt’s prospects might not be so shiny otherwise.