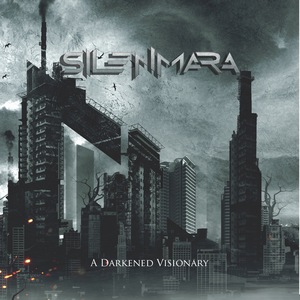 While melodic death metal is always going to be associated with Scandinavia, the younger crop of bands have found ways to make it their own on a more international level. Florida’s Silenmara have a bit of a Scandinavian feel to their music, but it’s also influenced by the land that they live in. Hence, the band’s fourth release, A Darkened Visionary, includes some straight death metal influences along with some NWOAHM to make it more their own.

The three already mentioned pieces make up the bulk of Silenmara’s arsenal. There are some very melodic moments, complete with excellent clean vocals (such as on “Visionary”), that feel akin to the then rising metalcore movement of the early 2000s. But then the band can do a complete 180 with the next track, and pull in more death metal influences (“Rampallian”) and sound entirely brutal. While those two songs seem to run the total spectrum of the band’s sound, they also hit the in-betweens with the remaining tracks. It makes the contrasts seem less extreme (and in turn, more suiting), and accentuates their playing style. “Locust” has catchy grooves to sink your teeth into alongside a short but sweet melodic solo, and the clean/harsh dynamic never feels forced or cliché. “Bed of Lies” hits as brutally as “Rampallian,” but the clean vocals give it a more soaring sense that elevates it into one of the EPs strongest tracks. It’s another example of how the band can switch things up on the fly but still make it sound surprisingly cohesive.

There’s a lot of potential to what Silenmara can offer based on the different strengths of A Darkened Visionary. They take a number of familiar influences and twist them into a modern metal formula that pleasantly never sticks to the rulebook. A surprising, out of nowhere release at the end of the year that should leave many craving another release.