Shrine of Insanabilis – Disciples of the Void (WTC) 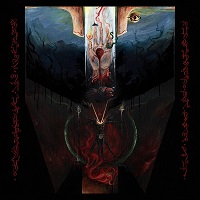 Black metal of the savage variety, as so well done and/or executed and/or played to the brink by the likes of Dark Funeral, Marduk, and early Watain, has always tried to compensate a lack of atmosphere and mood variance with zero subtlety. It’s like, here’s the break-neck portion, here’s how fast we can play, and here’s some tales about Old Scratch – take it or leave it. And while there’s the occasional flair or melodic give-up, it’s usually a case of who can withstand a relentless barrage the longest. For German newbs Shrine of Insanabilis and their Disciples of the Void debut, the result of not totally going down this path should give them just cause to exploration different terrain than the bands they are so patterned after.

The album – like a lot of debuts – is frontloaded. Held down admirably by way of surging “Ruina,” where upon a deluge of rapidly-picked tremolo riffs take form, Disciples of the Void gets off to a furious, yet predictable start. Then again, the mash-up here is one fire, as the synching between said speedy riffs and over-active snare work is comparable to that of Dark Funeral’s more unhinged moments. “Cycles and Circles” follows suit, “Still of this Earth” demonstrates the sort of range and feel that the bands we continue to mention simply don’t have at times. (Save for Watain, who of course, included a quasi-ballad on The Wild Hunt.) The song in question provides the necessary wiggle-room to not only help Shrine of Insanabilis avoid one-dimension-ville, but it also provides the necessary sonic breather.

There are still some stumbles here and there (including an unnecessary mid-album atmospheric number), but Disciples of the Void will become adorned with the usual “there’s some promise here” tag. While the members of Shrine of Insanabilis keep their identities a secret, there’s no question or doubt, for that matter, that if the Germans stay away from many of the trappings found within barbaric, blast-off black metal, they’ll be better off.