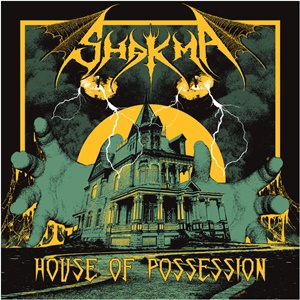 Rearing back and lobbing thrash salvos of the old school variety, Norwegian trio Shakma live for an era where sophistication and crystal-clear production values take a back seat to pure aggression and raw, relentless execution. Not much is known regarding their history, outside of a 2016 demo Night of Torment previous to the following full-length up for analysis, House of Possession. No matter – these musicians concentrate on the music through these ten tracks, and as a result achieve total domination because of the speedy, tight riffing, interesting stop/start transitions, along with the acidic, spitfire vocal salvos to complete the aural output.

Most of the influences come from the early Teutonic and European periods of thrash – it’s fair to say Shakma enjoying the likes of Sodom and Cyclone when tearing through the riffs, incessant snare hits, and manic melodies for “Blood Ritual” and “Deadly Spawn” among others. But there’s an added progressive element and exotic phrasing to certain chord progressions from L. Udjus that made me think about the very underrated Holy Terror – exemplified during the faster sections of “The Mummy’s Curse” or “Into the Fiery Death”. Bassist M.Runic also doubles on vocals, his distant screams and whirlwind verbal spew combining the attitude and bravado of Tom Angelripper with the passion of King Fowley. When the band choose to slow things down on “Midnight Mass”, the tribal drumming and guitar / bass bends give the track more of a Mercyful Fate flavoring – the vocals more in league with Satan (or Venom).

Add in a killer band logo complete with bat wings beginning to end and cover art that contains a haunted house, looming eyes, and outstretch hands for a multi-sensory experience and you have the ideal old school thrash record that makes no apologizes for it’s non-commercial attack. Shakma could be plopped into 1985-86 European thrash collections and not many would notice the difference – it’s primal, to the point, and sure to appease those down to earth people that desire these aspects most.