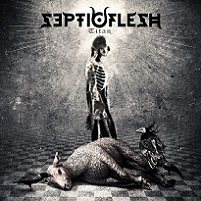 It’s the Septicflesh we’ve always wanted. Over the years, they’ve composed glorious opuses of symphonic doom/death metal and welcomed the world’s élite symphony orchestras into the metal scene. Once again collaborating with the Prague Philharmonic Orchestra, Septicflesh now deliver Titan to their temple. A record like Titan is just about the finest offering of symphonic-orchestral metal that a band can possibly bring forth, but only Septicflesh are the ones who could fulfill such a task.

Titan crushes with a weight heavier than stone like a titan, in the flesh, unleashed from the underworld. In this epic masterwork, Septicflesh take a step above the grandeur of their previous albums, and tuned it at least a level or two heavier than several of them. Titan has the ultimate composure of dark, doomy death metal poised with the elevating vibrancy of the orchestra and choir. Septicflesh are set poles apart from other symphonic-metal bands because they don’t inanely bounce from metal to symphonic forms, nor would they even think about boring us with some cheesy keyboard-flute scheme. They rather employ symphonies, orchestras, and choirs to enrich their rumbling, rolling tidal-waves of metal with graceful elegancy and spice them with exhilarating dynamics. And if you think symphony metal is too dainty, light, or anything of the sort, songs like “Ground Zero,” “Prometheus,” and “War in Heaven” will show you just how intense, brutal, and fit for metal a symphony orchestra can be.

For all you die-hard obsessive SepticFlesh fans, songs such as “The First Immortal” and “Prototype” are certain to make you ecstatic. These two particular masterpieces have essentially everything that is super Septicflesh-y, which includes biting death-metal guitars, thunderously resonating basses of doom, turbulent bowed strings, roaring bellows of brass, and yes, even a children’s choir. And it’s no surprise that “Titan” is one of the utmost monstrous, massive, destructive, and all the more marvelous, tracks on the record. If the titans who lay caged beneath the underworld had a theme song, it would indubitably be “Titan.”

Septicflesh will draw in your attention and completely devour it with some of the heaviest metal they’ve begotten in years, but also leave you enraptured by the tempestuous symphony orchestra. One thing for sure, these maestros aren’t even close to running out of ideas, not as long as they continue to conduct musical rituals like the ten voluptuous tracks of Titan.