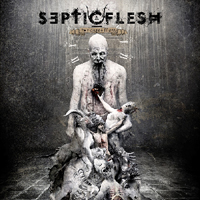 Had a feeling this wouldn’t be as monolithic and graceful as 2008’s Communion, but that’s not a big deal – few albums of recent memory are. With The Great Mass, Septicflesh are not a victim of their own success, but rather in the daunting position of having to follow up a comeback album that essentially, was without flaw. All this makes us think that if The Great Mass were the band’s comeback as opposed to Communion, it would be reversed. Probably.

Now totally immersed in the orchestral platform that was a passing thought onCommunion, the Greeks are quick to establish the orchestra’s dominance on opener “The Vampire From Nazareth.” By calling in the massive Prague Orchestra (metal’s #1 preferred orchestra), the band has created a sonic platform that is more grandiose (obviously) than anything they’ve done before, and it totally takes over songs like “Pyramid God” and “Oceans of Grey.” However, do not think this is done in the same manner as Dimmu Borgir or Cradle of Filth – Septicflesh have perpetually treaded the fine-line between death and black metal and continue to do so here, albeit in a much more striking fashion that aforementioned pair.

Classic shards from the band’s vaunted death metal past appear on “Rising,” which could be the album’s best song, as it employs those sanguine, exotic melodies to go up against Sotiris V’s clean vocals. On the flipside, the soundtrack-like quality to “A Great Mass of Death” and “Apocalypse” add further layers of intrigue, especially on the latter, giving singer (and art director) Seth Siro Anton some breathing room to bust out his healthy bellow.

Judging by the rapturous response the band received on the support slot for Behemoth’s 2010 winter tour, there is more than a passing interest in Septicflesh. If America’s fascination with all things bigger and better are to be believed, than The Great Mass hits the bulls-eye. Aside from that, these guys are now a Greek metal institution, still just a gallop ahead of Rotting Christ, and one of the underground’s true creative forces.