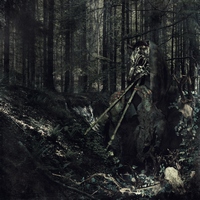 Black metal – seemingly one of the most flexible metal genres (who would have thought that 20 years ago), has given birth to many different sounds. But rare is the band that can take a more traditional black metal backbone and add to it the nuances of folk without tampering with its aesthetic. Selvans is one such band.

Taking the olden, majestic approach of Emperor (particularly in their synth use) and adding folk instruments to the mix doesn’t sound incredibly innovative at first glance. But the end product is exceptionally done, with an atmosphere that feels both ethereal and tormented. The flute and mandolin are tastefully used, adding to the atmosphere without being over-emphasized and chewing up too much of the scenery. There are some wicked melodies to be found from start to finish, with each of the lengthy tracks bolstering a number of great moments, such as the majestic opening to “O Clitumnel,” the scorching melodic black metal riffs of “Scurtchin,” and the sprawling 17-minute “N.A.F.H.” which gracefully switches between crushing slow segments (featuring some well-done spoken vocals towards the end that are reminiscent of Anorexia Nervosa), atmospheric moments, and speedy black metal. Lastly, for songs of this length, there appears to be a bit more structure and well thought-out composition. The meandering, woodsy feeling that can accompany music like this is thankfully left at the door.

The power of atmosphere can’t be emphasized enough on Lupercalia. It really wraps everything that’s going on around in one nifty little package that is sure to enthrall most fans of black metal. Melodies, grandeur, darkness, and folkiness…you can’t go wrong with that combination.