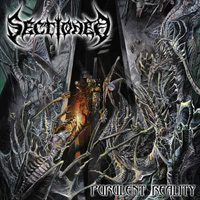 As it stands, cross-section death metal (i.e. take a ton of styles, throw it all together) is ruling the game, so when something like Sectioned’s Purulent Reality pops, it deserves a long look, if only because of its single-mindedness. Taking cues from classic Floridian and Swedish death metal (yup, we read the bio and listened to the album), this Hungarian five-piece keep it down and dirty, just like the originators themselves on this, their seven song debut.

The chunky rhythms and evil harmonies that comprised the bulk of early 90’s DM is readily present on opener “A Lonely Grasp of Winter,” a song that gradually heads into some interesting melodic territory. Yet that’s all that is heard in the melody department, as Sectioned unleash a steady stream of heads-down, quasi Obituary tactics (“My Love of Decay”), Left Hand Path-happy rhythms (“Loneliest Man”) and Grave-inspired riffage (“Mirrors”).

A band that is able to blur the lines between tribute/retro DM (i.e. Bloodbath, Chaosbreed) and honest-to-goodness, no-frills DM, Sectioned wouldn’t be a bad choice to hunker down with in the death metal bunker. There’s way worse stuff out there posing as death metal, believe us. Sectioned, in years time, could be an imposing commodity.