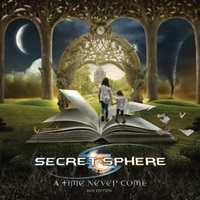 Arguments abound regarding the first works of art laid down in the early hard rock/metal age and whether they need to be updated for later generations. Truth be told – a lot of back catalog gets the second effort treatment to gain songwriting copyrights or merely to take advantage of modern recording updates. From Iced Earth to Testament, Destruction to Exodus to Sonata Arctica, it’s been a cash cow of sorts if you are an ardent collector of everything in your favorite artist’s catalog – yet something us old schoolers have a harder time swallowing. Because let’s face it, in our temples and hearts, how can you possibly better that indelible first impression seared in the psyche?

Welcome to the dilemma placed before me in discussion of Secret Sphere and their latest recording. A Time Never Come 2015 Edition is in celebration of this Italian power/progressive metal sextet’s second album- originally set for an exclusive Japanese re-release, the band expanded their horizons to re-record this effort with their current lineup, adding in new arrangements and artwork to sweeten the deal. Two-thirds of the lineup has shuffled around in the 14 year interim since its original 2001 appearance, and there’s no doubt that the golden voice of current SS singer Michele Luppi (ex-Vision Divine) runs circles around Roberto Messina. Does it justify another 11 song transformation about Aurienne, the girl who finds a strange magical sphere as we watch her voyage handling a mortal illness?

Keyboardist Gabriele Ciaccia definitely fills the sonic landscape on a more theatrical/symphonic path right from the start of “Legend”, but fortunately guitarists Marco Pastorino and Aldo Lonobile also factor heavily in the crunch/wow factor throughout, Aldo’s lead work a mix of semi-shred meets melodic master class. The slightly down-tuned guitar tone gives faster material like “Under the Flag of Mary Read” and “Hamelin” a darker feel than the original album – while the star of this 2015 edition has to be Michele. Singing low and high, accentuating words with texture, anger, excitement, and passion, the man can handle a power number like “The Brave” as easily as “Mystery of Love”, the graceful tear-jerker track. The fairy-tale oriented art from Nathalia Suellen seems better suited to the story on hand than the cyber-oriented first try.

In the end, the fans will decide if they need A Time Never Come 2015 Edition and vote with their wallets. While not disputing the quality, give me the first go around – imperfections and all, as Secret Sphere wet appetites for their next original studio record. 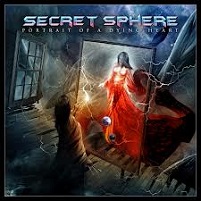