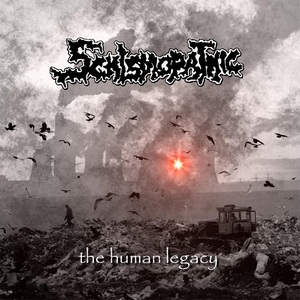 An interesting, but oddly becoming less rare of a story with Schismopathic. The band started up back in 1988, recorded one album (and a demo) and then vanished. The band reformed in 2020 with a new drummer and vocalist, and began making plans to record the now finished product in The Human Legacy. As one could expect, Schismopathic’s approach to grindcore has a retro vibe to it.

The Human Legacy may be a 2021 release, but it does have the feelings of the earlier days of the genre. The guitars are quite chunky in tone, with some real grinding sensations to be felt, but it lacks that massive chaos of blistering drums from beginning to end, a good thing as the band is more song-oriented rather than firing off 1-minute blitzkriegs of noise (outside of the 15-second “Deviated and Devoted”). The songs are brisk though, usually centering around the 2-ish minute mark but that gives them enough time to lay down some grooves and more memorable material alongside the brutal riff-work. “Landfill Site for Human Trash” has moments of buzzing and blasting speed, but compliments it with some mid-paced grooves and riffs that border on the melodic (but not too much so, no worries there). But it can be quite catchy with those slower moments, such as “Vote for Me” details with its gritty mid-tempo sections. It gives the band some added leverage for when they do push the accelerator, and they do it hard. “Proof of Ignorance” toys with punkish attitude and dives headfirst into lightning tempos as the chaos quickly stirs up.

Schismopathic capture that old school grindcore meets death metal sense with full fury. Raging yet memorable in just the right quantities. Hard to argue with that, even if the sound is one that’s familiar.