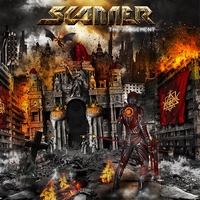 Absolutely buried on Noise Records’ roster in the 80s, German thrashers Scanner embodied whatever the notch below mid-level was during metal’s glory days. Beset by some really bad album artwork (see: 1988’s Hypertrace and its 1989 follow-up Terminal Earth) and lineup turnover, the band faded into the background as the 90s progressed, released another album 2002, then went on a sort of recording hiatus. The Judgement is the band’s first proper studio effort in 13 years, an otherwise competent display of power-on-thrash metal that has some legs.

Somewhat continuing their tradition of bad artwork (can anyone make out what’s happening?), The Judgement nevertheless, mashes up the up-tempo tenacity of the band’s thrash origins with Euro-ready power metal. The power metal angle is perhaps most evident on “Eutopia,” which is either purposely misspelled by the band, or they simply don’t know the correct spelling. Either way, it’s the album’s deepest cut, rounding out by searing melodic leads, an easy crowd-participation chorus, and even some droplets of female backing vocals. Elsewhere, the punchy “FTB” finds vocalist Efthimios Ioannidis lending some crisp caterwauls to the proceedings, which also applies to the double-bass happy “Battle of Poseidon.”

Always an interesting case study to see what happens to a reformed European band whose career never quite got off the ground. The festival circuit generally makes these bands feel bigger than they what they really are, something that could be applied to Scanner, who as noted above, never quite made it near the upper-tiers of the Noise roster in the 80s and 90s. But in any event, The The Judgement is by conventions, smack-dab where Scanner should be to appeal to the European market, a crowd who usually don’t have much of an issue hoisting up has-beens-that-never-were’s. Could happen with Scanner. Good for them if it does.