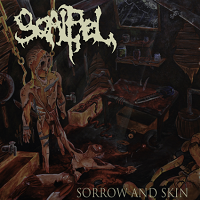 Sorrow and Skin is a very Unique Leader-esque, even though this gang called Scalpel fancies Boston as its home. It’s the first takeaway from an album that doesn’t have a very large wingspan – it’s all brutality, technicality, bestiality, etc., etc., but at this point in time, is more interesting that retro dung that has been thrown in our faces on a near-daily basis. And has long been the case with bands like Scalpel, you simply have to let them have their technical fun and bask in it, for they’re not going to do anything else.

Cool song titles to start (“Gutmulch,” who would have thunk?), the pacing of Sorrow and Skin is relentless, naturally, yet the band has its musicality together. Working around the various examples of blast beats (gravity, grind, one-arm) that appears to be so intrinsic to the band’s sound, a good portion of these riffs are interesting, like the meaty power chords on “The Black Juices,” or the chunky staccato hammering going on during “Sentinels of Severed Flesh.” It appears there’s some genuine thought put into the guitar parts (nice acoustic bits at the beginning of the title track), not some literal re-write of Butchered at Birth or the entire Autopsy discography…even Shitfun.

As we indicated at the beginning, Scalpel and an album like Sorrow and Skin are right up the alley for Unique Leader, a label that specializes in brutal and musically-advanced bands. Scalpel are both, and are bludgeoning…like a ten-ton hammer. A brutal, non-1997 one.