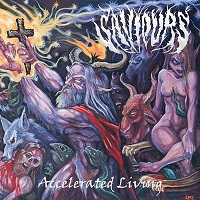 A band where the stoner tag doesn’t apply – no friggin’ way – Saviours kick out the jams in a High on Fire frenzy, with a tad more aplomb and NWOBHM sensibilities. Yet, don’t overlook the thrash angle to this thing – it’s quite prominent from the get-go and if “We Roam” isn’t one of the top thrash rock-and-rollers of the year, then color us mad.

Big, fuzzy riffs envelope the bulk of the album and usually run alongside Motorhead-inspired tempos, like on “F.G.T,” a jam that continues the rumble started with “We Roam.” Southern boogie and twin-g harmonies pop up on “Livin’ in the Void,” something that w couldn’t be out of reach for labelmates The Sword, who often have the propensity to sully things by being too pretentious. Saviours is so not that.

/yelp, which serves pummeling numbers like opener “Acid Hand” and the massive “The Rope of Carnal Knowledge” (love that opening riff) well. The album reaches its just crescendo with “Burnin’ Cross,” which allows for some well-placed guitar harmonies of the Iron Maiden-Killers variety in on the party.

It’s been a banner year for the fuzz-addled, progg-y, yet thrash-y, NWOBM-inspired legions, highlighted by Mastodon, Kylesa, Baroness, and now Saviours. It’s a blossoming sub-genre, that’s for sure. Accelerated Living is more intense and savage that one would initially think and should keep those dreaded stoner rock connotations at bay for the time being.