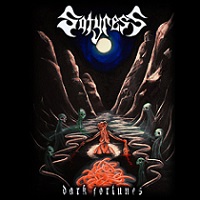 More face-time for the city of Portland, OR, who are gradually becoming the “it” place for hip rock and/or metal. Albeit anything that is hip now won’t necessarily be hip five years from now, but the surge of bands coming from the Pacific Northwest is something that cannot be ignored, and has been noted roughly a half-dozen times thus far in 2014. Satyress fall into that category, a freshly-formed (2013) doom troupe fronted by Jamie LaRose, falling in line with recent female-fronted entities Mount Salem, and Witch Mountain.

Dark Fortunes is the band’s six-song debut, an effort that peddles an array of high-quality, ballooned riffs, with LaRose’s harmony-happy vocals out and about, adding texture. At large, the songs are mainly in the classic Sabbath ballpark; tripped-out at times, but rife with heaviness (i.e. “Spread Thin”). Per the locale, it wasn’t much of a reach to expect Satyress to dabble in stoner rock avenues, which they do, emerging from the smoke-filled haze with the psychedelic “Esta Noche,” and “Archaic Passages,” which is probably LaRose’s finest moment on record.

Indeed LaRose is the band’s ace in the hole, and the main selling point. She proves to have more class and pizazz than some of her more hum-drum and tone-deaf contemporaries, which helps steer Dark Fortunes in the the right direction. And a lot of things line up nicely for Satyress – they’re from a happening musical spot, doom is always semi-popular, and, they have a lead singer capable of pushing them through the inevitable stoner/doom mire. They’ll be on a legit label for their next album. Definitely.