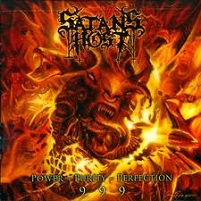 Not so much an improvement over last year’s excellent Great American Scapegoat 666 as it is a lateral move, Colorado’s Satan’s Host return with another slab of Satan-loving extreme metal in the form of Power – Purity – Perfection…999.

For a band that was once strictly a traditional/power metal band, their extreme metal maneuverings sound very fresh…lively even. And it’s not like this a batch of youngsters we’re talking about – the band has been around since the mid-80’s, albeit inactive for a long stretch in the 90’s. What Power – Purity – Perfection…999 brings to the table is crisp, well-written death/thrash metal that relies on the resourceful playing of guitarist Patrick Evil, who is never at a loss for a good melodic burst or speed-picking run.

The very-clean and lean production job brings to the fore a handful of choice numbers, especially “Dark Priest (Lord Ahriman),” a song

that sees Evil cull from every angle of his riff repertoire. “End All, Be All – 2012” follows suit, engaging in a battle between Deicide-oriented vintage DM and the European bravado of God Dethroned.

Much to their credit, Satan’s Host don’t rely strictly on speed or traditional death metal staples. “Azael – 9 Lords – 9 Keys – Abyss King” is proof positive of this, emerging as the clear-cut album highlight thanks to a sprawling, eerie atmosphere and again, uber-tasteful leads from Evil.

Broken up into three parts (with an acoustic interlude for each one), Power – Purity – Perfection…999 might, with time, come close to eclipsing Great American Scapegoat 666. There’s no rust or tread on this band, which should help maintain their case as one of North America’s most criminally underrated and overlooked death metal bands