Satan’s Host – By the Hands of the Devil (Moribund Records) 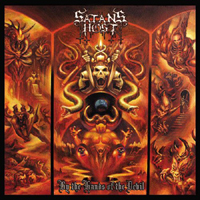 Talk about a coup. Re-enlisting current Jag Panzer singer Harry “The Tyrant” Conklin in the Satan’s Host ranks was a stroke of genius, making an already potent band, even more potent. Indeed Conklin fronted the band in the mid-80’s after Jag Panzer broke up, going on to start the shortly-lived Titan Force before re-forming Jag Panzer, but hearing him in this not-so power metal context on By the Hands of the Devil is quite the happening.

The slippery slope that is combining clean vocals with extreme metal is navigated effortlessly here, as Conklin’s trademark falsetto and pitch choices fall right in line with the band’s ominous chord movements and eerie melodies. When thrust up against frenzied blast-beat portions like on “Before the Flame,” Conklin sounds very comfortable, able to use the more throaty elements of his voice that are often overlooked in Jag Panzer. On “Revival,” Conklin channels the Satanic ghost of Don’t Break the Oath-era Mercyful Fate, while on the spooky “Bleeding Hearts of the Damned” and “Demontia,” he’s downright mystical. Again, a real coup.

Aside from the pummeling extreme death metal Satan’s Host has been purveying since their re-activation in the late 90’s, a healthy dosage of 80’s metal goes down here, with cuts like “Fallen Angel” (where Conklin does his best Dio) and “Norwegian Woods” demonstrating guitarist Patrick Evil’s deft composition and melodic ability. Best of all, this doesn’t sound remotely like a power metal, or Jag Panzer album.

How this album is able to successfully toe the line between all worlds of extreme metal is a marvel, and we’re not exaggerating. By the Hands of the Devil is too good to go unnoticed, and is a rare commodity because of its usage of all clean signing in the context of aggressive metal. Thirty-four years (!) into the game, Satan’s Host continue to improve with age. They’re like fine wine, of the most evil kind. Whatever that is. Killer stuff, this is.