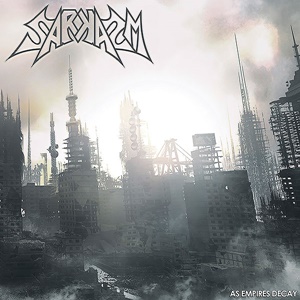 Originally a part of the Quebec metal scene during the early 1990’s, Sarkasm released a series of demos before fading away in 1994. The members would reunite for a few shows in 2006, 2011, and 2012 before reforming for good in 2019. In the interim, vocalist Bruno Bernier may be best known for showcasing his singing in Obliveon, appearing on two albums and an EP in the mid to late 1990’s during his seven years with the group. It’s another story of perseverance plus passion for one’s craft, as the debut studio album As Empires Decay features four-fifths of that first lineup (bassist Dave Bouchard was a part of the group in 1992).

After a swirling, cryptic start, “Voices” gets the proceedings off to a galvanizing crunchy opener – the transitions very groove-oriented, the guitar playing stacked with strong thrash meets death-oriented riffs as a flurry of steady double kick-oriented drumming obliterates your senses. From there the band deliver a steady diet of mid-tempo songs where the axe play shifts from tremolo-oriented action to old school doom, death or crossover textures – Bruno’s impassioned voice sending more chills of despair, while drummer Simon Thibodeau fills the aural landscape with progressive transitions against his solid, main duties. The slower, lurking crawl of “The Collapse” works brilliant because of the creepy narrative sequences as the musical components bounce up and down once the main verses kick in – the twin harmony lead break adding higher sophistication to the semi-technical, shape shifting riffs on display. All the requisite squeals, tempo switch-ups, steady bass/drum mechanics in sync while showcasing minor flair when necessary beyond the gritty, lower register roar of Mr. Bernier appear track to track. There are times where the band can beat certain riffs into the ground (“Burn the Scarecrow” the biggest offender), but for the most part Sarkasm keep the songs flowing in a brisk, focused direction – saving the epic “An Ode to Suffering/When Immortals Die” to the finale, a 7:24 outing that veers into Maiden-esque angles through a cleaner, quiet mid-section before a Candlemass-like doom instrumental sequence gives the listener and emotive guitar break.

Sarkasm does not go for any modern/new school audience with As Empires Decay. It’s a record for those who enjoy semi-intricate thrash with splashes of doom, death, and groove metal from a bygone era in this genre.