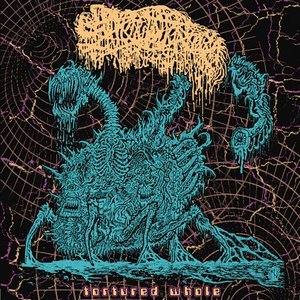 Upon a quick inspection, you’d be apt to expect Sanguisugabogg to be a slamming brutal death metal band. The wholly indecipherable logo (with notably challenging spelling to boot) and cover art here seems to scream underground brutality, and to that end, you will get something rather brutal in the end. But this is an entirely different breed of death metal than one might initially think.

Sanguisugabogg has a sound much more dependent on grooves and primitive riff schemes than that of utterly faceless slams and blasts. The band spends much of their time grooving and lumbering away in fact. The speed is there when it needs to be, but Sanguisugabogg is happy to lay into the mid-tempo and crawling speeds, focusing on a fair amount of hooks within the otherwise brutal structure (complete with disgustingly low vocals) to grab the listener. And it works. Opener “Menstrual Envy” grinds its way along with swaggering riffs – sometimes almost akin to a more coherent and less absurd version of Mortician – and it gives the band a certain level of charm. The rest of the tracks follow suit in a similar regard, with some like “Posthumous Compersion” firing off energy blasts, and others like “Dick Filet” offering some devastating bottom end and churning riffs. While it sticks thoroughly to a death metal base, the emphasis on providing some hooks for the listener to latch onto is notable and well-used. It’s easy to hear this and think that it could push some newer death metal folk further into the fold as they digest the rotten riffing the band carefully doles out.

Tortured Whole keeps things straight-forward and prioritizes the death metal components that matter. Disturbingly heavy riffs with just enough catchiness is key, and Sanguisugabogg have already managed to lock into that formula early on.