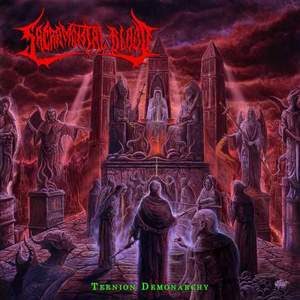 It’s rare to see when bands give a suitably adequate description of their music. Many seek to give themselves a new “genre” to place themselves into or that little bit of space (that usually doesn’t exist). Sacramental Blood decided to be more honest in their approach, and clever at the same time. With their third album, you get the A-B-C’s of Death metal. How’s that for a simple approach.

(A)ggressive, (B)rutal, and (C)atchy (D)eath metal is what the band promises, and in that regard Ternion Demonarchy absolutely delivers. It’s a cheeky way to describe one’s band but when elements of Sinister, Deicide, Obituary, and more pop-up, one can’t help but agree. But the thing that is almost as important is the cool description, is that Sacramental Blood aren’t all about firing up their time machine and giving you a blatant re-do of the bands mentioned above. Instead they use the modern machinery of death metal to give it that nostalgic early ‘90s feel without making you feel like you are stuck there. The result is frequently fast material that doesn’t shy away from the blast speeds, but also mixes in some genuine songwriting (thus the catchy flair) to occupy your mind while your body goes nuts. Rippers like “Livid Deaths Descend!” and “Nearest to the God” slip some mid-tempo chunks in between speed to make the songs still click after a few listens, rather than just a frantic speed burst.

Ternion Demonarchy doesn’t promise to be the most inventive or creative, but if you want a well-done death metal album that winks and nods at the past without outright pandering to it, you can’t go wrong with this one. Sacramental Blood know their ABC’s, and their musicianship is all the stronger because of it. Well-rounded death metal.