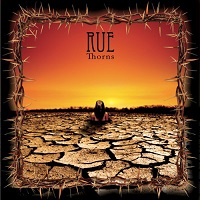 Last heard from in 2003 (which frankly, seems like eons ago), Midwestern sludge metallers Rue return with Thorns, their second full-length. While their extended absence might have provided them with ample time to re-stock their creative juices, Thorns unfortunately, simply has too many songs

and not enough good ideas to make any kind of a dent. It’s an album that hits often and early, but fails to keep its momentum.

As we’ve come to learn, “sludge” is becoming harder to define. There arebands

that take the punchy, song-oriented route (ala High on Fire and dare we say, Acid Bath), and there’s a swath that could care less about making things exciting. Rue fall into the first category, usually finding a method of groove via a battery of crunchy and punchy riffs, something that is brought to the fore on the excellent “Sadaver,” and “Broken Heart, Broken Wings.”

Jeff Fahl doesn’t have much to work with, oftentimes having to pick his spot over re-used dinge riffs of the Kyuss variety. He does however, have a biting melodic snarl to him, not terribly unlike Kyuss’s John Garcia or even one-time Corrosion of Conformity vocalist Karl Agell. With the aid of more complementary (and less derivative) material, Fahl could emerge as one of the better pure rock/metal vocalists in North America, especially if he loses his silly grunt approach.

On one hand, it has to be really easy to be a sludge band right now considering the pure strength in numbers. Yet on the flipside, a band like Rue cannotafford

to stumble, especially after such a lengthy time away, something they did quite frequently on Thorns.