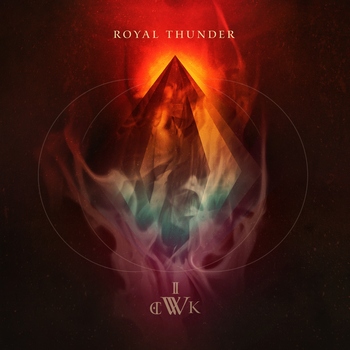 One of those bands that haven’t really ever stated that they were “metal,” but ended up lumped in by association with the metal scene through touring with more metallic acts, Royal Thunder are set to truly spread their wings and fly with this third effort, Wick. Jumping from Relapse (yet another reason for the metal association) to Spinefarm seems a wise move by the band, giving them some extra propulsion on their most sonically diverse offering to date.

With Wick, Royal Thunder present the “why bother with musical classifications” argument. It’s clearly not unusually heavy, though the band does have their moments when the music kicks into high gear and you’ll find some real rippers in the solo department (see “The Sinking Chair” or “Anchor”), and there’s no question that the album is emotionally heavy from start to finish. But the bottom line is that this is simply well-written music that hits a spot that many modern bands do not. Using the guise of a classic rock approach, they zip between more upbeat and insidiously catchy numbers like “We Slipped” to harder rockers such as “Turnaround” and more bluesy, slow-burners (the title track). Of course, vocalist Mlny Parsonz incredible vocals take front-and-center, with the gut-punching “Plans” showing just how much raw and emotive range she’s capable of. Her vocals immediately grab your attention and give an urgent sense to each track, taking the rollicking licks of a track like “Tied” and giving it an added boost of energy, and just the right amount of attitude.

Fully capable of launching themselves into considerable crossover success, Royal Thunder have crafted an album that should resonate with a multitude of folks with Wick. There’s an immediate accessibility yet a clear depth to the songwriting that revels more of itself with each listen. A simply joy to listen to an album like this – soaked in a variety of genuine emotions that keeps it compelling from start to finish.