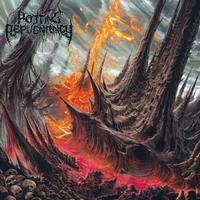 Rotting Repugnancy. A band name like that makes no bones about genre stylings. Which is why I found it a pleasant surprise that Harbingers of the Last Judgement wasn’t a clinical blast fest with pig squeal vocals, with songs about more than just disemboweling prostitutes or eviscerating the weak. Not that I have any issues with that kind of fare mind you, but a little variation is always good.

Rotting Repugnancy is a power trio of death from the U.K. who create very organic death metal very reminiscent of late 90’s era Morbid Angel, Bolt Thrower and with a dash of mid period Deicide. It’s evident as soon as opening cut “Desert Storm” that RR are rooted in a time where death metal is about being brutal and churning up a pit with old school style break downs and vocals not so guttural they can’t be deciphered. The guitar tone isn’t over processed and the drum sound actually sounds like a human playing a kit, which is where my division comes in with Harbingers of the Last Judgement.

I’ll say this clearly: I like this album. It’s got a sort of blue collar approach to death metal, not unlike Jungle Rot, and I dig that. However after a few spins I find the problem with Harbingers is that it isn’t really extreme one way or another. It never really gathers momentum, instead it just kind of exists in mid-paced, singular tone, purgatory. Sure it has it spots where it thrashes up a bit more, but there isn’t a big dynamic from song to song to make it really dynamic. To add to this thought, there aren’t really any solo’s on the album, which is a necessary ingrideient to any death metal album.

Though a bit lack luster overall, I think Harbingers of the Last Judgement does have charm to it that shouldn’t be dismissed if you’re a fan of the styles mentioned above. Plus the run time is roughly a half hour and the cover art is fucking cool, so if nothing else you can up your under ground street cred and support a band just trying to buy a bong load.