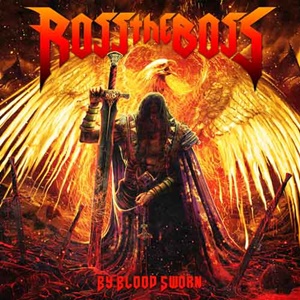 Fresh off a global tour covering the first six albums of Manowar material, it’s time for Ross the Boss to release a set of new studio material with their current lineup: vocalist Marc Lopes (Let Us Prey), bassist Mike LePond (Symphony X) and drummer Lance Barnewold joining guitarist Ross Friedman on their quest to keep heavy/power metal alive and kicking. By Blood Sworn is one of those records that unleash the monster from within, leaving hordes of followers drenched in sweat and tears as they face the trials and tribulations of life with this set of material by their side.

When it comes to the tones of the record, this has more of a primal, plug in and play execution aspect to it – you can really feel the bluesy textures building into the metal backbone of songs like “Among the Bones” and “Devil’s Day” as if you are embarking on a trip back into 1981-1984, with Marc taking that sneering, Alice Cooper/Rob Halford chameleon charm in his mid-range while also being aggressive and potent when necessary for dynamic diversification. Softer, acoustic aspects within “Faith of the Fallen” appear midway through the record, a thoughtful ballad that contains the right keyboard supplementation and proper tempo restraints to allow Ross’ expertise on the guitar shine, especially during the lead break where less is indeed so much more. Those who love upper echelon, sustained screams will savor “This Is Vengeance”, while the epic side of the band comes out on the longest cut “Lilith” – a 7:23 arrangement that starts with Mike LePond’s thunderous bass foundation as the song builds into a Maiden meets Mercyful Fate-ish mid-section that keeps ears pinned at the power riffs until its doom-oriented conclusion.

If you are expecting total Manowar worship for By Blood Sworn, you’ll be slightly disappointed (although the title track does harken back to “Blood of My Enemies”). Ross the Boss understands what their fans desire and delivers a solid set of material that should get you headbanging, and that’s the ultimate goal of a heavy metal album, right? Hoist those hammers, don your best bullet belt and denim vest, and ride into glory again with Ross the Boss. 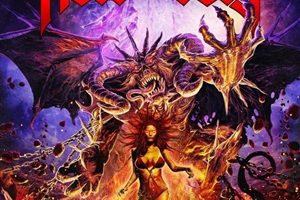