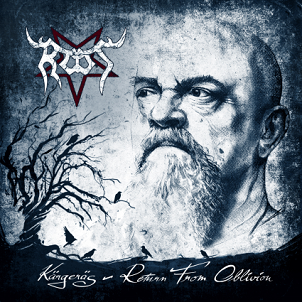 With a voice you can pick out from a mile away, Root singer Jiri ‘Big Boss’ Valter has been the primary constant in a career that has spanned nearly three decades. As perhaps the most notable black metal band to emerge from the Czech Republic, Root has often eschewed many of the primary sonic tenets of the style, starting with Valter’s husky, deep-throated, hearty-man bellow. Their first album since 2011’s Heritage of Satan, Root turn in another off-beat, but wholly listenable platter in the form of Kärgeräs – Return From Oblivion.

It should be noted the band is merely black metal in aesthetic only. It somewhat reminds one of the gradual refinements another Agonia band—Forgotten Tomb—has taken over the years. Whereas Root’s early efforts were buried in the sonicsape of occult black metal, the songs on Kärgeräs benefit from a clear production job. Therefore, the melodic punch of “Osculum Infame” or the folk caress of “Moment of Hope” serve to add even more colors to the spectrum of a band who has clearly outgrown its early sound.

For measure, Root go down some rather noticeable commercial wells, like on “New Empire,” which ranks among one of the more “friendly” songs the band has done. But, as with anything in Root’s career, it all comes back to the distinguishable vocals of Valter, who can be bold and domineering (“The Book of Death”) or nearly operatic (“Do You Think is the End?”) Regardless of how one views Root’s career trajectory and unraveling of their black metal base, Kärgeräs – Return From Oblivion is a convincing slab of Eastern European metal.