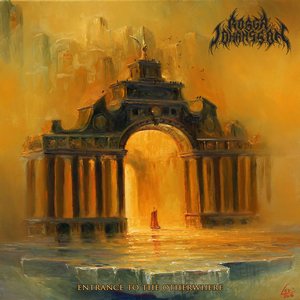 We just can’t seem to escape the grasp of Swedish death metal legend Rogga Johansson (not that we’d really want to anyway). He’s always up to something in old school Swedeath land, and this latest iteration is that of a solo project to sit alongside his many, many, many bands over the last few decades. Even though you’d be pretty quick to identify the man behind all of the instruments, it’s not a bad thing in this case.

Entrance to the Otherwhere sounds about like what you’d expect it to. That HM-2 crunch combined with an effective mid-tempo gallop and Johansson’s immediately identifiable roars and screams. It’s catchy, it’s always super-groovy, and it works in the long-run. You can have plenty of fun with it if you are looking for some straight-ahead death metal with a focus on songwriting over uber-technicality. Plus, the man clearly knows his fanbase, and is willing to deliver to it. But the one thing that does stand out as being a bit different this time around is the additional focus on melodies. There are melodies on his other material for sure, while keeping it grounded in death metal – but here they are present enough to make this scribe thing more along the lines of Edge of Sanity rather than say, Dismember. It’s immediately introduced in the opener, “The Re-Emergers,” with some delicious galloping melodies that are fist-raising in nature, and the following cut “Till bergets puls” brings in some keys that feel a bit odd but that totally work. Things continue along at the same level in each successive track – pick a track and you can easily find something that makes it stick out.

As cited, Johansson has a specific style, and if you dig it, Entrance to the Otherwhere is going to be right up your alley. He may have a format in mind, but with melodies that hit this hard and are this enjoyable, he’s clearly got the writing of old school death metal down to a science.