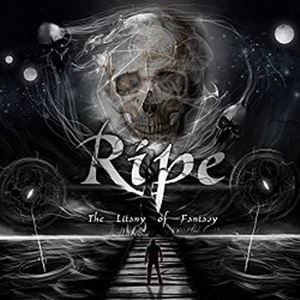 While active since 2002 and releasing three albums fairly quickly from 2008-2012, Danish heavy metal act Ripe have a six-year lapse between records as their fourth full-length The Litany of Fantasy comes out. Understandable though, considering vocalist Michael Bastholm Dahl is also a part of the veteran thrash act Artillery, recording two albums and touring globally in the process during Ripe’s relative inactivity. Glad to have you back, gentlemen – as these 13 songs encompass a focused melodic metal style that occasionally veers into upbeat hard rock, while occasionally being a little more aggressive and heavier as called for.

Right out the gate a Judas Priest/Primal Fear-engaged “Tales from the Slitheredge” assaults all senses, the thunderous Peter Egtved-led double bass and heads down guitar rhythms compliment a catchy, bluesy main melody from Dahl and an equally fiery lead break from Jakob Højgård Olsen. The record cruises along at a comfortable pace, the experience never overwhelming as far as diverse ideas and execution – Ripe quite adept at keeping the arrangements lean and mean to cut away all the extraneous, unnecessary self-serving aspects and focus on grooves and hooks that capture and catch attention for subsequent retention. It’s why one minute you can be swept into the thick bass and hefty guitar grooves for “Brimstone Vagabond”, then move quickly into a late 80’s Maiden-esque affair such as “Breathe in Black Air”. Doomy strains, synchronized twin guitars, shrieking falsettos, wah-wah enhanced lead break action – these all pop in and out depending on the needs of the track at hand, and Ripe excel at knowing how to use the tools of the trade appropriately. Michael’s range is perfect – clear, emotional, comfortable, and engaging with harmonies during the key choruses for “Mummified” or complimentary gang support during the slamming anthem “Pound the Nail”.

The more passes The Litany of Fantasy gains, the greater chances are favorites will change. At this moment the subtle bluesy metal swing for “Wail to No Avail” and Airbourne-ish “You Won’t See Me Break” never fail to get windmill/horn approval. It just feels like the wait has been worth it for Ripe and their fans, which hopefully will get even more of a boost profile-wise due to Michael’s activities with Artillery. Those who love the melodic side of heavy metal and hard rock won’t be disappointed, that’s for sure.