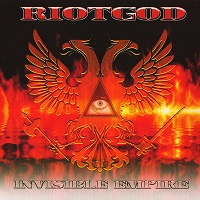 The art of rocking. It’s not very well-defined, for anyone can claim “they rock” (or “We Rock,” like Dio did on Last In Line). Now, a lot of metalbands

try to include “rocked-out” moments to compensate for their one-dimensional songwriting, while others couldn’t rock their way out of a paper bag (insert non-rocking act at your own free will). So when an album really rocks, like Riotgod’s Invisible Empire, it’s a reason to celebrate…or just rock out.

The second go-round the Monster Magnet (who rock when Wyndorf has his act together) rhythm section of drummer Bob Pantella and bassist Jim Baglino,Invisible Empire is a pure-bred metal/rock tour de force, relishing in simple and to-the-point songs

, most of which rely on one or two centralized ideas that in turn, bring out the rock and kick out the jams. To avoid being too granular, the band’s stellar combination of Led Zeppelin and Soundgarden is spot-on, able to avoid the trappings of sounding like a tribute act while establishing some semblance of identity…while rocking.

The Soundgarden reference is tied directly to singer

Mark Sunshine (please let that be his real name), who sounds like an inspired Chris Cornell when he’s packing vocal heat. Sunshine is on fire during opener “Breed,” even providing some vocal restraint and soul during the acoustic “Gas Station Roses” and “Rebirth.” He’s also the catalyst on “Crossfade,” which is a bona-fide rocker of a song if there ever was one. From there, the punchy, meat-and-potatoes rock angle of “Fool,” the 70’s-inspired “Slow Death,” and “Loosely Bound” are incredibly effective, proving that you don’t need to bog down one’s songs with countless ideas to make them work.

Albums like Invisible Empire are a rare find in a metal landscape where masking one’s songwriting deficiencies is masked by technicality and trend-chasing. As such, Riotgod is a throwback rock/metal fan’s wet dream, and are every bit as rocking as their Monster Magnet companion band. Actually, they out-rock MM, and everyone else. Invisible Empire is near-brilliant.

Number of times the word “rock” and its various forms was used in this review: 18 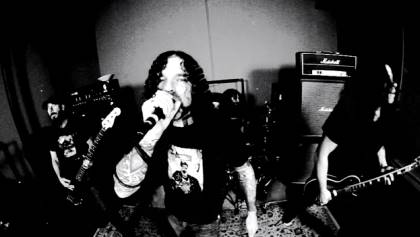