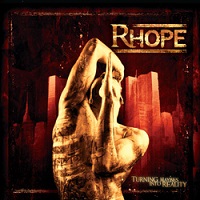 Released on Bakerteram Records, A subdivision of Scarlet Records with the intent on forging new acts onto the international scene, the Italian four piece known as Rhope produce quite an eclectic musical

cocktail on their debut album Turning Maybes into Reality. On the surface, these 12 songs

are surely in the metal category, although elements of modern groove, thrash, and alternative sounds enter the picture depending on the nature of the arrangement.

The tone of the guitars and bass is one that’s tuned down at least a half=step from the norm, giving you a darker bounce on songs like “Into the Box” and the more System Of A Down-ish “Your Peace.” Rhope performs best when they are taking their music in more epic territory, introducing a growling element and diverse riffing techniques that can be traditional and slightly off-time such as the 7:46 “False Needs”.

Lead vocalist Giammi Giuliani has a crossover type delivery, sometimes very clean with that Trapt/Breaking Benjamin feel and then uses his slight Italian accent to emphasize quirky passages, both evident in one of my favorites on the album “Extinction Is Forever” where he doubles up with the growls of guitarist Diego Minach. This song

also contains a prolonged solo from Diego that moves from sparse picking to stellar melodic emphasis which is rarely heard for this sub-genre of metal – brilliant in the Michael Schenker or Queensryche motif.

The funky bass from Paolo Minach within “Entropy of Brain” should be something worth exploring in the future, especially when coupling the thrash-meets-doom parts that precede his fluid finger work. Turning Maybes into Reality will not be an instantaneous winner within the minds and hearts of most metal heads. When a band pushes the envelope of accepted boundaries, there will be resistance. Stick with this Rhope – you may be onto something special in the next couple of years.