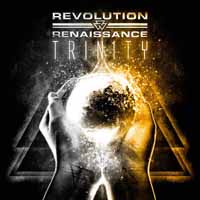 If you ever need soap opera drama within the power metal world, look no further than guitarist Timo Tolkki who moved on from Stratovarius onto Revolution Renaissance. Stabbings, bloody female vocal replacements, who-did-what-solos on the album, surrendering your namesake of the band you formed…it’s like watching all the best car racing accidents over the decades in one sitting. With Trinity he’s putting this act to rest, and I suppose if you are going to move to greener pastures with Andre Matos [ex-Angra] and Uli Kusch [ex-Helloween, Masterplan] among others in Symphonia, it’s understandable that adequate songwriting and passion will only take you so far in this dog-eat-dog metal world.

Trinity probably comes closest to Timo’s past excellence in Stratovarius circa the Episode or Visions album periods. A mixture of catchy, radio-oriented mid-tempo offerings (“Falling To Rise,” “A Lot Like Me”), the occasional double-bass fist-pumping adrenaline rush effort (“Just Let It Rain”) and of course, the ten minute-plus epic that eerily has “Revelations” Iron Maiden meets Infinite-era Stratovarius in its influence bank (the title track), this third Revolution Renaissance album isn’t as experimental and more in line with the power background Tolkki delivered for so many years.

Vocalist Gus Monsanto has an adequate voice and yet sometimes doesn’t have that high pitch muscle control you expect from the best in the business. Keyboardist Bob Katsionis (Firewind) adds depth to the attack with his attention to fill in the gaps on standout cut “The World Doesn’t Get To Me,” possibly autobiographical considering the psychological twists and turns of Timo’s life.

In the end, we all want less outlandish, tabloid news from our metal musicians and more concentration on killer songwriting and performances, so here’s hoping that Symphonia in 2011 will give the fans more reason to cheer and less reason to snicker at how the mighty have plummeted through the years.